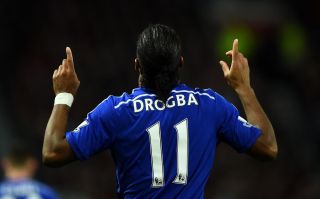 At 36, Drogba is very much in the twilight of a glittering career that has seen him become a Stamford Bridge legend after winning a cluster of silverware – including the UEFA Champions League in 2012 courtesy of his crucial goals in the final –during his first spell with the Premier League leaders.

The veteran striker returned to Chelsea after a two-year absence in July, with injuries to Diego Costa and Loic Remy bumping him in the pecking order in recent weeks.

And Drogba has risen to the challenge, scoring in his last three games as Chelsea thrashed Maribor 6-0, drew 1-1 at Manchester United and avoided an embarrassing League Cup exit at Shrewsbury Town in midweek.

Reflecting on Drogba's Chelsea comeback, Mourinho said: "We decided altogether [to do a deal], the owner, the board, me, him, all of us together.

"I think that for such a legend in this club it's a difficult decision to take and we took it together.

"We had to believe him, him believing in himself and I think he still has conditions to be important, which he was always in this club.

"He was important last week [against United and Shrewsbury] when we were without Diego and Remy, and he did something nobody should have to do which is play two 90 minute matches in 48 hours which he did in a fantastic way."

Drogba's form has given Mourinho a welcome selection headache.

He added: "It's a fantastic problem for me.

"When we made that group of three at the beginning of the season we think we did well. Three levels of investment, three levels of expectation, of contribution, of qualities as a striker and the team is happy with that, we have three good strikers in our squad."