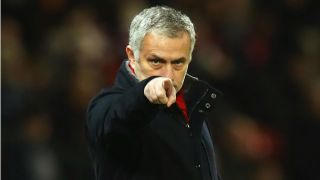 Jose Mourinho has described reports suggesting he will quit Manchester United at the end of the season as "garbage".

United have won just one of their last five games in all competitions, prompting suggestions the Portuguese was growing disillusioned with life at Old Trafford and seeking a way out in June.

However, speaking ahead of Friday's FA Cup third-round clash at home to Derby County, a forthright Mourinho insisted he was going nowhere.

"If you want to ask me directly, which I suppose you want, if I see myself next season at Manchester United, I say, I see myself.

"As I told myself when I arrived, I'm going to leave when the club wants me to leave, because I have no intention to leave, my intention is to stay, to work, to improve and bring the club to where it belongs.

"My desire is to stay until the owners and the board are happy with my work," Jose says. "My intention is to improve and to bring the club to where it belongs." January 4, 2018

"I still have a contract, I am in the middle of my contract and my desire is to stay until the owners and the board is happy with my work.

"So yes, the garbage news affected me just on these aspects, because it's something I don't admit."