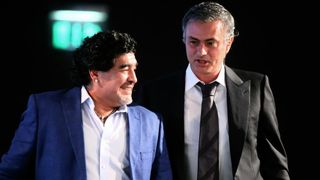 Mourinho watched Olivier Giroud come off the bench and equalise in the 89th minute at Old Trafford on Saturday, cancelling out Juan Mata's opener, which had looked to be the match-winner for so long in the Premier League blockbuster.

But post-match, Mourinho received a timely phone call from arguably the game's greatest ever player - Argentina, Barcelona and Napoli great Diego Maradona in a boost to lift his spirits.

After being held to their third consecutive Premier League draw at home, United are sixth in the table, eight points adrift of Liverpool and Manchester City.

United next face Feyenoord in the Europa League on Thursday, before hosting struggling West Ham on Sunday.