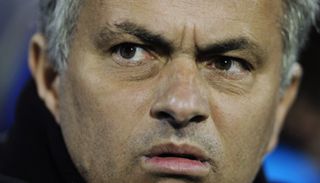 The outspoken Portuguese, who has hinted he may be on his way back to Chelsea despite having a contract with Real until June 2016, reiterated that he will decide his future at the end of the La Liga campaign in a month's time.

Desperate to win the 10th European Cup that has eluded Real since 2002, club president Florentino Perez hired Mourinho from Inter Milan three years ago, but under his guidance the Spanish giants have been knocked out in the semi-finals of Europe's elite club competition three times in a row.

If Mourinho leaves, he will have won one La Liga title - with a record points haul - and two King's Cups should Real beat city rivals Atletico Madrid in the final in two weeks.

"The record league title is mine, you [journalists] will want to erase it but you won't be able to," Mourinho, who has a testy relationship with the Spanish media, told a news conference previewing Saturday's La Liga match at home to Real Valladolid.

"We won the King's Cup for the first time in 20 years and you won't be able to erase that either," he added.

"The three Champions League semi-finals, which personally speaking do not leave me satisfied, can't have been easy to achieve because with 18 coaches in 21 years [Real] only got to five semis.

"That's the poor record of Mourinho: three years and three semi finals. For me it is a source of pride to have been the Real Madrid coach that ended Barcelona's hegemony in Spain."

After Tuesday's Champions League elimination by Borussia Dortmund, when Real narrowly failed to overturn a 4-1 deficit in their semi-final second leg at the Bernabeu, Mourinho dropped his strongest hint yet that his time in the Spanish capital is drawing to a close.

Asked after the game if he would stay on next term he told ITV Sport: "Maybe not. I don't know but I want to be where people love me to be."

At a later news conference he added: "I am loved by some clubs, especially one. In Spain it is different, some people hate me, many of you in this [press] room."

Mourinho had another dig on Friday at Iker Casillas, the club captain and goalkeeper who he has sidelined since he returned after breaking a bone in his hand.

Real bought Diego Lopez from Sevilla as cover while Casillas was out and Mourinho has stuck with Lopez even though Casillas is fit again, prompting speculation the pair have fallen out.

"Problems exist when someone thinks he is above the rest," Mourinho said.

"With players who feel like they are all at the same level I have no problem," he added.

"I should have brought Diego Lopez in at the end of my first season here but perhaps I didn't do enough."

Asked repeatedly about his future, Mourinho said he had still not decided whether to stay or move on.

"I can confirm that I have five league matches and a cup final to play and afterwards I will sit down with the president... and we will talk about my future.

"I have always lef