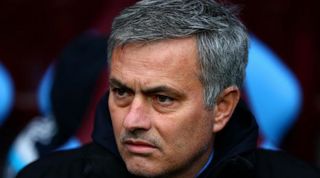 Mourinho felt the Netherlands captain should have been taken to account by the governing body in a similar way to Diego Costa, after the Chelsea forward's stamp on Emre Can in the League Cup semi-final second leg with Liverpool.

Former Atletico Madrid frontman Costa was subsequently banned for three matches following retrospective action by the FA, with the final game of his suspension coming when Chelsea host Everton on Wednesday.

Mourinho claimed there is a media-driven "campaign" against Premier League leaders Chelsea, and once again vocalised his dissatisfaction on Tuesday.

"The same people who suspended my player didn't want to suspend a player this weekend," he said.

"A player did this [flung an elbow] in the face of somebody else and nothing happened.

"The same thing happened last season when Ramires was suspended and one week later a Man City player kicked a player at Norwich, who was on the floor and nothing happened. I'm used to it."