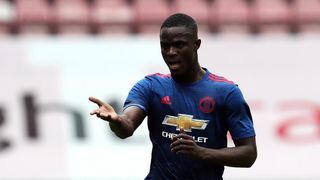 Mourinho lured Varane to Real Madrid when he was manager of the Spanish giants and before long the young Frenchman was a crucial cog in his defence and the Portuguese boss sees similar potential in Bailly, who played his first game for United in Saturday's 2-0 friendly win over Wigan Athletic.

Bailly played almost the full game - substituted with seven minutes remaining to a warm round of applause from the United faithful - and Mourinho was happy with what he saw, even if he did acknowledge the defender's lack of experience.

"With Eric, the way the fans showed how much they liked his performance when I changed him is enough," he said.

"Of course, he’s a very young boy coming from a completely different environment, but you could see what he is at this moment.

"For Eric, this was the first time he has worn a shirt like the Manchester United shirt. He can't speak English and can only communicate with the ones who are French-speakers or Spanish, so for him it'll be step by step and that's why I gave him more than 45 minutes.

"I wanted to give him more minutes because he needs to play more than others. He needs to feel it and start communicating.

"I will give him everything to try to make him better and better, like I did with other central defenders I’ve had in my hands. Like, for example, Varane, and I will try to make him the best I can.