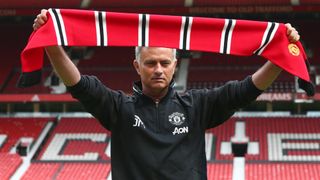 Jose Mourinho insists he will not be hiding behind Manchester United's poor results in the past three seasons and wants to be challenging for silverware from the start.

The Old Trafford side have had to settle for seventh, fourth and fifth spot respectively in the Premier League over the past three campaigns, having last won the title under Alex Ferguson in 2012-13.

Mourinho feels merely improving on last term's results is not enough for a club of United's stature, though, and is adamant they should be aiming to win titles again in 2016-17.

"Managing Manchester United is not the dream job, this is reality. But it is a job everyone wants and not many people get this chance," said the Portuguese.

"I got this job and I know the responsibility and expectations that come with it. I know the history of this club. I know what the fans expect from me. I am not nervous about this challenge. I have shown in the past decade that I can live with big expectations.

"I have never been very good at hiding behind words and philosophies. And I have never tried to do that. I have always been aggressive in my approach, regardless of the risks that come with it.

"It would be easy and pragmatic to point at the last three years. But I am not good at that aspect. I want to be more aggressive, we want to win titles.

"I have to prove things to myself, not to others. That's my nature. I would never be able to work without success. I always ask things of myself and of others, that’s in my nature.

"I could be defensive and point at our results in the past three years, but I cannot do that.

"When people have had a certain menu for years, you must improve the menu if you want to change it. Success has been normal at Man United. We want to forget about the last three years. The players must not think about doing better and finishing fourth, that is not the aim."

United missed out on Champions League qualification last season and Mourinho is desperate to return to European club football's elite competition sooner rather than later.

"It will be frustrating that we are not playing in the Champions League," he added.