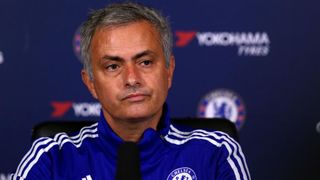 Chelsea manager Jose Mourinho feels he continually comes in for different treatment from the media.

The Portuguese saw his side suffer elimination from the League Cup in midweek following defeat to Stoke City on penalties.

With just one win from their past seven matches, Mourinho was irked by suggestions results had become more important for his side than performances.

He believes he has been judged against a separate benchmark to his colleagues and remains adamant his team are showing signs of improvement.

"I'm always judged differently on everything, so it's nothing new for me," Mourinho said.

"In terms of the confidence of playing, [we are] playing better and better.

"Against Stoke we played very well. At half-time it should have been 4-0. It wasn't a lack of confidence.

"In the last two matches, it's been the opposite of that. We've played very well."