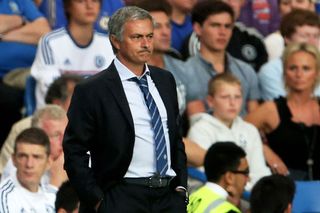 The two English giants will clash at Old Trafford on Monday night, with Rooney the subject of transfer speculation linking him with a move to the Portuguese manager's side.

Mourinho was surprised by suggestions the home crowd will be angry at him but was adamant his Manchester United counterpart unsettled Rooney by suggesting he would be a backup player this season.

"They are against me?" Mourinho said.

"But I didn't say (to Rooney) you will be a second-choice for me, and they are against me?

"We are trying to get a player that a manager (Moyes) told 'you will be a second option'.

"We are not going for Van Persie - they don't have to be against me.

"If I say Ramires is a second option for me and he plays when Lampard is tired or injured, if someone comes here to get Ramires, nobody is upset."

The former Real Madrid tactician then attempted to clarify his comments about Moyes' style of management.

"In every big team, I am not criticising, you have first options and second options, and those second options must be very good players," he said.

"Of course big teams must have second choices, big players too, and the point is if the players are happy to accept that situation."

Moyes has said that Rooney could play a part in the blockbuster match despite Chelsea intimating they would make another bid for the English international in the coming days.