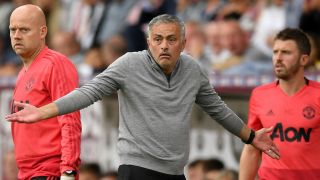 Jose Mourinho has suggested the size of the pay-off he would be entitled to will shield him from the sack at Manchester United.

A brace from Romelu Lukaku helped to shift some of the gathering gloom around Mourinho's tenure on Sunday, as United bounced back from consecutive defeats with a 2-0 win at Burnley.

Mourinho stormed out of his previous post-match news conference, following last Monday's 3-0 loss to Tottenham, repeatedly demanding "respect" from reporters after tenuously linking the margin of defeat to the number of Premier League titles he has won in a decorated career.

The former Chelsea, Inter and Real Madrid boss was in a far more jovial mood at Turf Moor and even joked that a hefty pay packet means he will be at United for some time yet.

"They say I'm in danger, but I don't think it. If they send me away, do you have any idea how much money they would have to give me?" he chuckled when speaking to journalists from Italian newspapers Gazzetta dello Sport and La Repubblica.

Mourinho is contracted to United until the end of next season after penning a one-year extension in January.