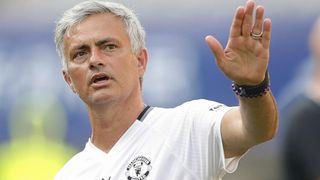 Manchester United manager Jose Mourinho insists the club are not focusing on just the one player amid reports linking them to a big-money move for Paul Pogba.

United have reportedly had an £85million bid turned down by Juventus, with the Italian champions eager to hold on to the France star.

While Mourinho gave the strongest indication yet of United's interest in Pogba, the Portuguese manager made it clear that they are keeping all of their options open.

"We set four targets for us, we got three of them and we are going to get the fourth," Mourinho said, having brought in Zlatan Ibrahimovic, Henrikh Mkhitaryan and Eric Bailly.

"We established the profile of four players to improve the squad, to give us more options, especially adapted to my way of thinking about football.

"Everybody speaks about one, but it wouldn't be a surprise for me if it is not him and it is another one because we went for profile.

"We have two more options in front of us and we are going to close one."

On Pogba, the 53-year-old said: "I am not going to try to make you naive and believe that we are not trying for one player.

"You have smoke, you have fire - you used to say something like that, right?

"Apart from that, we know other clubs are also involved and for us it is not, 'are we going to win the race or lose the race?' It is not a race, it is just the market.

"When you go to the market, you have other options. You cannot focus on one, so we are in a very comfortable situation."

Mourinho and Co. are in China as they prepare for their International Champions Cup clash with Borussia Dortmund on Friday, before facing local rivals Manchester City on Monday.