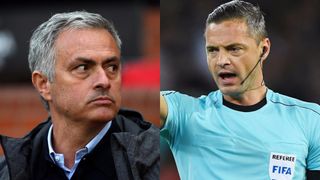 Damir Skomina, the man who Jose Mourinho once described as "weak and naive", will officiate Manchester United's Europa League final against Ajax.

The Slovenian drew the ire of Mourinho during the Portuguese's second spell in charge of Chelsea after failing to award a penalty during a 0-0 Champions League group-stage draw at Dynamo Kiev last season.

"The referee was weak and naive. Big penalty," Mourinho said at the time, although it mattered little in the long run as Chelsea went on to qualify as winners of their group.

United booked their place in the Europa League showpiece in Stockholm later this month with a nervy 1-1 draw at home to Celta Vigo on Thursday, which secured a 2-1 aggregate success.

Skomina, an international referee since 2003, has presided over six Champions League matches this season, including Monaco and Borussia Dortmund's quarter-final second leg.

Meanwhile, 41-year-old German Felix Brych has been given the task of officiating the Champions League final between Real Madrid and Juventus in Cardiff on June 3.