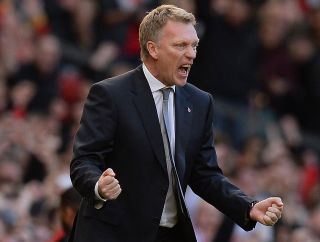 United were facing the possibility of a third Premier League home match in a row without victory on Saturday as a close-range Peter Crouch effort and Marko Arnautovic's superb free-kick put Stoke into a 2-1 lead either side of Robin van Persie's leveller.

But a late resurgence saw the reigning champions storm back to take all three points and ease the pressure on United manager Moyes thanks to headers from Wayne Rooney and Javier Hernandez.

Stoke could have been out of sight when leading 1-0 as Crouch and Jonathan Walters both missed opportunities to extend their lead.

And Moyes was grateful to his Spanish keeper for keeping Stoke at bay.

"We needed our goalkeeper to make an extraordinary save (to deny Walters) in the first half," he said.

"But that's what he's in the team for, he's there to do that, he's part of the team.

"Stoke have not scored many but they have not conceded many either, so we knew we would have to work hard after going behind."

United have been notorious for late comebacks at home in the past, but had only won once on their own turf in the Premier League before their victory over Stoke this season.

But Moyes felt his team deserved the win and was delighted to see all three of his strikers get on the scoresheet in the process.

He added: "I thought in the end we deserved to come back. I thought we did  a lot of good things and a lot of poor things that put us in the situation we were in. Some of the play was good but it didn't put is in a position to score goals.

"I thought we were very worthy of getting a goal back. We tried, we knocked at the door, we tried to find ways through.

"In the end, we had three centre forwards on the pitch who all scored goals."