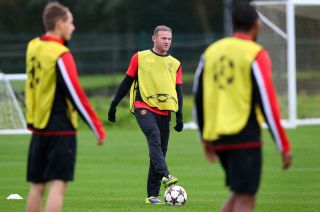 United's former manager released his autobiography on Tuesday in which he wrote about his relationship with Rooney and the long saga over the striker's future at Old Trafford.

In the book, Ferguson writes Rooney was not open to new methods in training and also accuses the England international of losing his form and fitness as well as sticking his nose into the Scotsman's business by telling him which players to sign.

The timing could not be worse for the under-pressure Moyes, with a crucial Champions League clash against Real Sociedad at Old Trafford on Wednesday.

"I have no concerns. I think Wayne is completely focused on his football," Moyes said.

"He has been since the first day of pre-season. He is in good form, looking after himself and playing well.

"Alex Ferguson can do what he wishes. He is his own man.

"Certainly everyone at Old Trafford will love to hear what he can say, certainly the supporters will.

"He is someone with great knowledge so I’m sure everyone will enjoy reading it."

Rooney has certainly had no issues with his form this season and has five goals already to his name in all competitions.

And Moyes will need the 27-year-old to be in top form if United are to take a huge step towards the knockout stage by beating the Spaniards.

Moyes has a few injury concerns for the clash with Rio Ferdinand, Nemanja Vidic, Tom Cleverley and Danny Welbeck all racing the clock to be fit.

"We've got one or two knocks and niggles which most teams will have at this time of the year," the United manager said.

"Vidic and Rio are making good progress, Danny Welbeck had a bit of an injury from the game so we'll have to check on him.

"Tom Cleverley isn't as bad as we thought. They both have a chance."