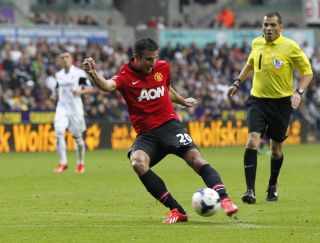 Van Persie, who scored twice in his side's 4-1 win over Swansea City on Saturday, has just one Premier League medal to his name thanks to United's title win last season.

But Moyes believes the Netherlands international is hungry for more silverware after tasting that success.

"I said to them (United's players) the other day, you know, how many medals had they won?" said Moyes.

"Giggsy has won 13, quite a few of them have won five or six and Robin said he'd only won one.

"So for me the challenge is for Robin to keep trying to win medals and I think he's got it, I think he's driven to do it."

And Moyes, who took over at Old Trafford from the retiring Sir Alex Ferguson in the close-season, admitted to being taken aback by just how good the striker is.

"Is he better than I thought? Maybe, yes," the Scot explained.

"Some of his hold up play as well. We’re talking about his goals but the balls at Swansea when he got it into him were great. His hold up play was great and he brought people into the game for us as well.

"So he’s got an all-round game and we want to keep supplying him and give him every opportunity to score."