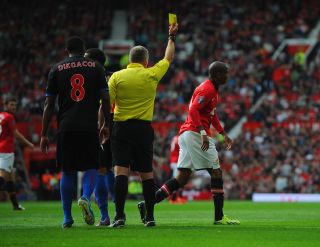 Referee Jon Moss booked the former Aston Villa man in the 18th minute of the clash at Old Trafford on Saturday after he appeared to initiate contact with Kagisho Dikgacoi in the area.

Young then went on to controversially win a penalty just before half-time when he again went down under pressure from Dikgacoi - an incident that resulted in the Palace midfielder being sent off, even though replays showed initial contact between the players had come outside the box.

The 28-year-old has garnered something of a reputation for simulation and was given a warning about his conduct from former United boss Sir Alex Ferguson after incidents against Villa and Queens Park Rangers in April 2012.

And Ferguson’s successor Moyes has now indicated Young will face further censure after this latest episode.

"He deserved to be booked if he dived. I'll say to Ash it's not what I want. The Palace lad held his leg out but I think Ash put his leg into the Palace lad's leg."

Moyes went on to express his sympathy with Palace manager Ian Holloway for the incident that led to Dikgacoi's dismissal and Robin van Persie opening the scoring from the spot.

"I don't like the rule where every time it is the last man it means it is (a red card)," he added.

"I thought it was harsh. If I was Ian Holloway I would be disappointed. OK, it might be a penalty. But I don’t think the boy made a challenge to wipe him out.

"Unfortunately that is the rule."