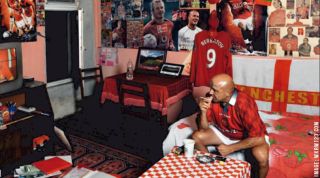 The man formerly known as Marin Zdravkov was inspired to change his name after witnessing Manchester United win the Champions League in 1999.

He entered what would become a 15-year legal battle, featuring 17 court appearances, to combine his own name with that of the club. So now, his passport reads as Manchester Zdravkov Levidzhov-United.

In a previous interview, he has recalled how his father would steal a television signal from neighbouring Romania to watch old First Division matches in the '70s.

“Back then, in the Communism era, if I had told someone that I would like to rename myself after a football club from the ‘evil’ captialistic world they would have certainly put me in jail,” he told the Manchester Evening News.

Well, the outside of it anyway – unfortunately he didn't get the opportunity to meet any of the players, but we're sure he enjoyed his day out nonetheless.