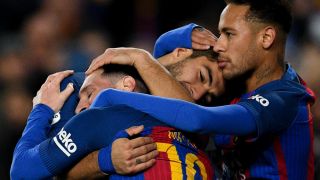 The star trio came into Saturday's home LaLiga match with Villarreal on 98 for the season, and strikes from Neymar and Messi took them to a century.

Since Suarez's arrival from Liverpool in 2014 saw him join Messi and Neymar at Camp Nou, the forwards have been prolific in helping Barca to silverware.

They netted 122 goals in their first campaign together as the club won a historic treble of LaLiga, the Copa del Rey and the Champions League.

They then bettered that tally with 131 in 2015-16, a campaign which saw Barca win the league, Copa del Rey, Club World Cup and UEFA Super Cup.

This season Barca have already won the Supercopa de Espana and remain in with a chance of securing a league and Copa del Rey double.

Messi has done the most damage with 50 goals in all competitions, Suarez scoring 34 and Neymar chipping in with 16.

There are still three matches to play this season, with LaLiga matches against Las Palmas and Eibar to be followed by the cup final against Alaves, which will be Luis Enrique's last match in charge.