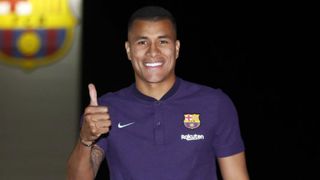 Jeison Murillo says he is fulfilling a dream by joining Barcelona from Valencia.

The 26-year-old will move to the LaLiga leaders on a loan deal until the end of the season, which includes a purchase option of €25million.

The Colombia international is believed to have been signed due to injury concerns at the heart of the Barca defence, with Samuel Umtiti and Thomas Vermaelen sidelined.

Having made only three appearances for Valencia in 2018-19, Murillo is thrilled to move to Camp Nou, having promised himself he would one day wear the club's famous colours.

"Two years ago, I said that I would wear Barcelona's shirt one day," he told Catalunya Radio show Tot Costa.

"I've fulfilled a dream and I come with the intention of helping the team as much as possible.

"I will try to enjoy this moment and I hope that everything works out well."

Barca play their final match of 2018 at home to Celta Vigo on Saturday.