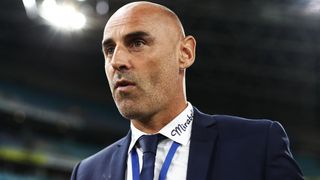 Melbourne Victory coach Kevin Muscat insists his team have nothing to fear in the A-League Grand Final against Sydney FC.

The Sky Blues are favourites to win the championship after a campaign which saw them finish 17 points clear atop the table and lose just once in the league.

Muscat criticised the Sydney media for their approach in the lead-up to Sunday's clash at Allianz Stadium, but said his team were ready.

"All the cheerleaders across the border [are] trying to place some doubt in our mind," he told a news conference on Friday.

"There's nothing to be afraid of now that we are here because it's not a surprise to us."

Muscat said the talk ahead of the decider, which will be played on what is expected to be a poor Allianz Stadium surface, suited him just fine.

"There's been a lot written and said during the week and it's very Sydney-centric, isn't it, this competition? It's great," he said.

"It feels like it's us against the nation so it's great, just the way I like it."

Victory finished second to Sydney and lost all three meetings with the Sky Blues by one goal throughout the campaign.

But Muscat said his side's best would scare Graham Arnold's team, with his attacking third including the likes of Besart Berisha, Marco Rojas, James Troisi and Fahid Ben Khalfallah.

"The clear focus this week is more about ourselves. If we're at our best, weaknesses will appear and cracks will appear," he said.

"The focus has been clear. Yes, we show a great deal of respect for every opposition we play, but for the cracks and the weaknesses to appear it's worrying about ourselves and making sure we're at our best.