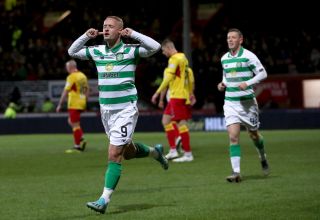 Leigh Griffiths told doubters his time at Celtic was far from over after getting back on the goal trail in the 2-1 William Hill Scottish Cup win over Partick Thistle in Maryhill.

The 29-year-old Scotland striker has had a disrupted season due to injuries and personal problems which go back to Brendan Rodgers’ time as boss.

Future about his speculation increased last week when Neil Lennon brought in Poland Under-21 striker Patryk Klimala on a four-and-a-half year deal from Jagiellonia Bialystok.

Griffiths was given his first start since last month in Maryhill and opened the scoring in the 12th minute with his first goal since August and only the fourth of the season before Hoops midfielder Callum McGregor made it 2-0 in the second-half with a deflected drive.

Jags midfielder Stuart Bannigan reduced the deficit in the final seconds with a penalty.

Asked if his finger-in-the-ears goal celebration was a message to doubters, Griffiths said: “Correct.

“There are a lot of pundits and ex-pros who think my time at Celtic is finished and the only way I can shut them up is by scoring goals and playing well.

“My time at Celtic is far from finished, believe me and hopefully this is just the start of a good run.

“I am not going to lie, I had to bite my tongue.

“I keep seeing the same things on social media and get sent the same things, I really have to bite my tongue because it is not nice to see and I wish people would let me get on with my game.

“It seems that everyone wants to talk about me and  Celtic bringing other strikers in which means I am finished at the club.

“But today I showed I am still around and I can still score goals and play well.

“The last couple of weeks in training I have feeling brilliant and the more chances I get to play the fitter I will become.

“I want to be back in the Scotland fold again come March (Euro 2020 play-off semi-final against Israel), that is a big aim for me as well.

“The more game time I can get the more chance I have of being in that squad.”