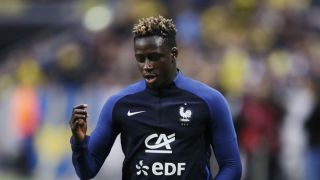 New Manchester City signing Benjamin Mendy has achieved something many fans can only dream of: the offer of a personal parking space at Nando's.

The full-back incurred the wrath of Manchester's parking attendants when he left his Ferrari parked illegally as he went to collect takeaway from the popular chicken restaurant.

The peckish Mendy was reportedly issued a £60 fine for his indiscretion, prompting an appeal for help to Nando's to avoid falling 'fowl' of the law in future.

"New parking spots needed pls," he tweeted to Nando's, prompting them to respond with "We got you covered for next time Benjamin" alongside a picture of a parking spot reserved specially for the France international outside one of their establishments.

We got you covered for next time Benjamin August 23, 2017

"Will definitely take my next date there," Mendy promised in reply.

Mendy's parking problems were captured by paperazzi who had been waiting outside the hotel in Manchester where he is still staying following his reported £52million transfer from Monaco.

Far from having his feathers ruffled by the attention, the 23-year-old later shared a snap of him alongside one photographer, with the caption "Just having fun with all the photographs [sic] waiting down my hotel all day long ahaha".

The "Why is he doing that" face  just having fun with all the photographs waiting down my hotel all day long ahaha  August 23, 2017

Mendy has yet to make an appearance for Pep Guardiola's side due to a thigh injury, but could feature against Bournemouth on Saturday.