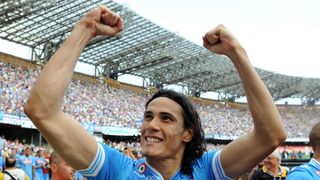 Cavani played for the Serie A side between 2010 and 2013, the Uruguay international since becoming PSG's record goalscorer.

But with the Ligue 1 champions reportedly keen to raise funds, Cavani and Di Maria have both been linked with moves away, although Neymar has insisted he is staying in the French capital.

Napoli, though, sought to distance themselves from the PSG duo on social media, using the hashtag #StopFakeNews to deny reports about the attacking duo.

President Aurelio De Laurentiis also hit out at rumours Napoli could seek to bring Cavani back to the club after a five-year absence, as well as decrying links with Real Madrid striker Karim Benzema.

"We can't take all the newspapers because there are so many lies," De Laurentiis said to Radio Kiss Kiss. "Di Maria and Benzema? Very much false.

"I'm very surprised because the Corriere dello Sport editor is experienced and I only wish good things for him. Is Antonio Giordano the only one I can trust to tell the truth?

"There's an agreement between myself and [coach Carlo] Ancelotti. Why would I sign these two old men, with all due respect? I don't have to please the fans, they play football in the bar, I respect them but they need to stay calm and let us work.

"The possibility of Benzema is not remote, it's very remote. Cavani? He earns €20million gross every two months. He's brilliant, but I don't think he'll halve his salary. If Cavani were to call me and tell me he's OK to cut his salary in half and fit the Napoli wage structure, great.

"A deal with Cavani? Absolute nonsense! What kind of idiot goes to Paris by helicopter? You take a jet."

Vigorous training followed by the press conference with the President. Excited and motivated! July 11, 2018

"Ancelotti resigning before the start of the season? Complete and utter nonsense!"

De Laurentiis suggested earlier this month Juventus' new signing Cristiano Ronaldo was offered to Napoli before joining the Serie A champions in a €112m switch from Real Madrid.