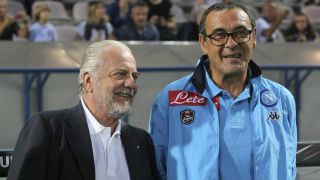 Napoli president Aurelio De Laurentiis has vowed to deliver on his promise to sign "a major player" in the January transfer window.

Maurizio Sarri has taken his side to within a point of the Serie A summit and secured safe passage to the Europa League knockout rounds in an impressive opening few months at the helm.

De Laurentiis has already spoken of Napoli's desire to battle for major honours at home and abroad in the coming years, revealing that interest in Gonzalo Higuain and a bid from Juventus for Marek Hamsik were flatly rejected.

The 66-year-old expressed his satisfaction earlier this month that Napoli have operated within Financial Fair Play regulations but is determined to land the star signing he promised supporters in the new year.

"A major player will arrive because Napoli should only field champions," he told Radio Kiss Kiss.

Head coach Sarri received criticism from club legend Diego Maradona towards the start of the season, who claimed the former Empoli boss should consider himself fortunate to succeed Rafael Benitez.

Maradona backtracked on those remarks as a result of Napoli's form, however, and De Laurentiis insists he never had any concerns that the 56-year-old would fail to prove his critics wrong.

"I never had doubts about Sarri. The era of Benitez is the past, it's not even close. It's part of Napoli footballing history," he added.