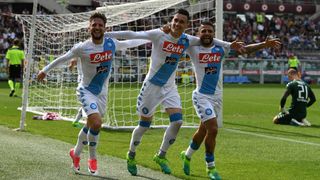 Napoli thrashed Torino 5-0 on Sunday to climb into second spot and keep some pressure on Serie A leaders Juventus.

Jose Callejon gave Maurizio Sarri's men the lead after seven minutes, beating Joe Hart with a low finish after being sent clear into the box.

Torino then held firm until the hour mark when Napoli doubled their lead, Dries Mertens pulling the ball back for Lorenzo Insigne to finish well from just inside the area.

The scoreline grew more emphatic as Napoli added three goals in seven minutes, Insigne turning provider for Mertens, who raced onto a throughball before cutting inside to smash a shot past Hart.

Callejon turned home a left-wing Mertens cross at the back post before the 30-year set up Piotr Zielinski to complete the scoring with Napoli's 107th goal of the season, a club record, ensuring they moved above Roma.

Sarri's side could still claim the title, but Juve will secure their sixth straight Scudetti if they avoid defeat against Roma at the Stadio Olimpico later on Sunday.