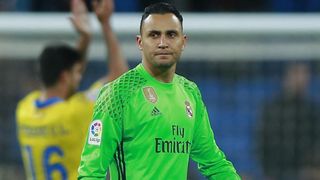 Real Madrid goalkeeper Keylor Navas took responsibility for his mistake against Las Palmas, but is eager to improve despite his uncertain future.

Cristiano Ronaldo rescued Madrid with a late brace, seeing the 10-man hosts play out a 3-3 draw at the Santiago Bernabeu on Wednesday.

Navas, who has regularly been linked with a move away, was at fault for the visitors' third.

The Costa Rica international was beaten to a pass by Kevin-Prince Boateng, who placed a finish into an open goal.

"I am calm. I am aware I made a mistake," Navas said, via Marca.

"I think in the overall game I didn't play badly, but it is true that I made a mistake.

"I don't know if I'm going to be in Madrid and I will defend my position until the end, and I will continue to work so the fans can trust me again."

4 - Keylor Navas has made more errors leading to goals than any other La Liga player this season (all competitions). Strange.March 1, 2017

A red card to Gareth Bale shortly after half-time hurt Madrid, who quickly fell behind 3-1 before Ronaldo's heroics.

While they have a game in hand, Zinedine Zidane's side slipped behind LaLiga leaders Barcelona – who had earlier thrashed Sporting Gijon.

Navas said: "I just want to help the team because LaLiga is still very alive, many matches remain."

"There are always good times and bad times," he added.

"We are aware that things are not going good right now, but I'm sure good times will come."