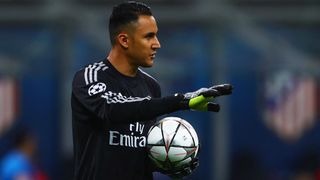 Keylor Navas is targeting more titles at Real Madrid after winning the Champions League with his side last season, although the goalkeeper needs to recover from a heel injury first.

Navas was not able to take part in the Copa America Centenario with Costa Rica as he required surgery on the problem, but the goalkeeper is hoping to be fit for the new La Liga season.

The 29-year-old said he is "recovering nicely" from his surgery but is not able to put a timescale on his recovery.

"Thank God everything goes well and I'm recovering nicely, which is most important," Navas told Marca.

"You have to take everything calmly and face it with happiness. Often one would like to be in another situation, but I have no other. You have to come here, be with the physio and work perfectly to be a hundred per cent as soon as possible."

Last season was a breakthrough one for Navas, who confirmed his status as Real Madrid's number one goalkeeper despite Zinedine Zidane replacing Rafael Benitez as the club's coach, after Iker Casillas left to join Porto at the start of the 2015-16 campaign.

"I want to win many titles with Real Madrid."

Navas explained that surgery was required on his heel problem due to the high number of games he was having to play while in pain.

"In the end I got used to pain. I played with a lot of pain," Navas said. "At the time of testing it was that we had to make this decision because it was best for my health.

"The year was complicated and I got used to that pain, though it was not recommended. After the season, we had to cut the root problem.

"I had matches with much pain, but I was strong and pressed forward. You always want to play, but I also say that when I did not play was because I was honest and said I could not.

"There were times when I needed a break to go to the field with more strength in the next game."