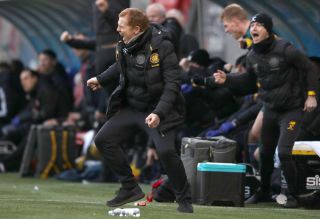 Neil Lennon danced a jig of delight as Celtic hit back against Hamilton before declaring they had delivered a psychological blow to Rangers’ title hopes.

The Northern Irishman raced onto the Foys Stadium pitch to celebrate as Odsonne Edouard grabbed the second of his two goals.

And Lennon admits his moment of wild abandon was borne out of sheer relief after seeing his team avoid the kind of slip-ups that have derailed Steven Gerrard’s Ladbrokes Premiership dreams.

While Gers could not find a way to unlock Aberdeen on Saturday having lost at Hearts last week, the champions remained patient against an Accies team defending for their lives and struck three times in the final 12 minutes to seal a 4-1 victory.

Lennon is aware the Light Blues still have a game in hand but is more than satisfied with the healthy cushion his side have opened up at the top.

“It’s called relief,” said Lennon after being asked about his on-pitch embrace with Ryan Christie. “You want to capitalise and make the most of things. When the third went in we had three points wrapped up.

“We thoroughly deserved it and we will only get more of that – teams making it hard to break them down.

“Psychologically it’s good. I’m thinking it’s four rather than seven as I’m assuming the opposition will win their game in hand. It’s the first buffer for a while.”

Marios Ogkmpoe tested Celtic’s nerve as he struck the opener but with the hosts reduced to 10 after seeing Jamie Hamilton dismissed for a last-man tug on Leigh Griffiths, they soon levelled through an Edouard free-kick.

Accies’ box came under siege but the visitors had to wait until the 78th minute to see Christopher Jullien steer them on course for victory with a deft finish.

Edouard and James Forrest added two more in the final stages to leave the Hoops staring confidently at a ninth straight title.

Lennon added: “I’m delighted with the result and three points. I wasn’t happy with the first half. The structure made it difficult. They set up really well.

“We wanted more tempo and knew Hamilton would be difficult to break down, so we had to wait a while for the second goal. But once we got one we knew we would get more.

“I’m proud of the players and the momentum we’ve built at the start of year has been fantastic.”

Lennon admits he had to tell Griffiths to calm down after he was involved in an early flashpoint. The striker was lucky to avoid a red card 13 minutes in after being accused of stamping on Sam Woods.

Referee Nick Walsh gave the Hoops hitman the benefit of the doubt as he produced only yellow – but Hamilton assistant Guillaume Beuzelin felt the striker should have walked.

“Watching live that’s what I thought,” said the Frenchman, who was deputising in the dug-out as Brian Rice began a five-match gambling ban.

“We all thought that on the bench and we were 30 metres away. Maybe the angle the ref had meant he couldn’t see that, but the fourth official or assistant maybe could have helped him.

Hamilton now drop bottom of the league, but Beuzelin said: “We need to have this motivation every game and if we do then we will be fine. I’ve been here the past five years so we know what we need to do to survive.”