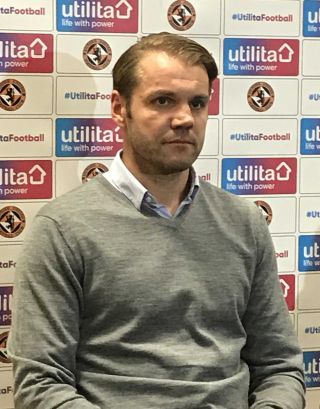 Robbie Neilson is looking for 1,500 “crazy” Dundee United fans to drive them on to Ladbrokes Premiership final play-off victory at St Mirren on Sunday.

The tie appears to have swung towards the Paisley side following Thursday night’s goalless draw at Tannadice, although Saints manager Oran Kearney rejected that notion.

United boss Neilson, pleased with the way his team performed in front of a bigger-than-usual crowd of 11,062, believes the Terrors’ travelling support can make the difference, also pointing to the confidence taken from the 2-1 William Hill Scottish Cup win in Paisley in February.

He told ArabZone: “I look forward to the game and I think the players are too.

“The pressure turns on St Mirren. It can be difficult to play in front of a full stadium.

“We will take 1,500 crazy, raucous fans down, making noise, backing the players and it now spins to St Mirren. They have to handle it.

“We have won there before. The pitch suits us down there, it’s a decent size, a good surface, we get our fans behind the goal and make some noise.

“It will be a great day. It is all about recovery now so when we start that game at three o’clock on Sunday we give ourselves the best chance.”