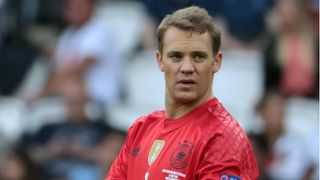 Manuel Neuer has been included in Germany's preliminary squad for the World Cup, with Joachim Low including four goalkeepers in an initial 27-man selection.

Neuer, out of action since September due to a foot injury, has been given the chance to prove his fitness, with Marc-Andre ter Stegen, Bernd Leno and Kevin Trapp his rivals for selection.

Low - who agreed a contract extension to 2022 on Tuesday - has left out Bayern Munich striker Sandro Wagner and injured Liverpool midfielder Emre Can, as well as Borussia Dortmund midfielder Mario Gotze, who scored the goal that clinched the World Cup title four years ago in Brazil.

Arsenal defender Shkodran Mustafi is another notable absentee after an error-ridden Premier League campaign, with Serge Gnabry unable to force his way into the group despite impressing on loan at Hoffenheim.

Jerome Boateng is named in the squad despite the centre-back missing the end of the season with a thigh injury, while uncapped Freiburg striker Nils Petersen earns a place after scoring 15 Bundesliga goals last term and Mario Gomez is also included.

There are seven Bayern representatives in Low's initial squad, including Thomas Muller, Mats Hummels, Sebastian Rudy and Joshua Kimmich, but four players will have to be cut when the coach names his final 23.