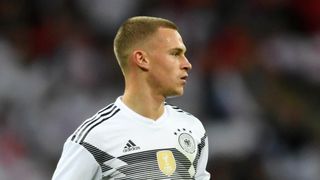 Joshua Kimmich says the only positive Germany can take from their pre-World Cup friendly defeat to Austria is the performance of returning goalkeeper Manuel Neuer.

The Bayern Munich man made his first appearance since sustaining a broken metatarsal in September, making a series of smart saves in the 2-1 loss at Worthersee Stadion on Saturday.

He was unable to do anything about Martin Hinteregger and Alessandro Schopf's fine second-half strikes, though, as Germany's winless run stretched to five games.

A frustrated Kimmich said: "There are not a lot of positive things to say after a game like that.

"Apart from the performance of Manuel Neuer, almost everything was negative.

"We only created few chances. We had a second opportunity with Julian Brandt. I can't remember another one except that.

"We gave the opponent a lot of space and helped them with our mistakes.

"At the beginning of the game I think we were dominant but not determined. But if you make a lot of mistakes, as we did, and fail to finish your attacks, you make your opponent better."

Marco Reus was also full of praise for Neuer's performance, but would not be drawn on whether he thinks the 32-year-old will be Joachim Low's number one for the World Cup.

"His performance was positive," said Reus.

"I am not sure how long he was actually out, but after such a long time it was important for him to have three or four good saves. I think he had a really good game.

"The people who decide will sit down and discuss [whether he should be number one], but I think today's game showed that he is heading in the right direction."

Germany will look to get their preparations back on track when Saudi Arabia travel to Leverkusen on Friday, before starting their bid to retain the World Cup against Group F rivals Mexico on June 17.