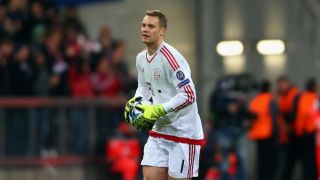 Manuel Neuer has revealed that he has taken inspiration from Edwin van der Sar and says the Netherlands great reinvented the discipline of goalkeeping.

The Bayern Munich shot-stopper is renowned for being comfortable with the ball at his feet, helping to popularise the role of sweeper-keeper during his trophy-laden time with Bayern and world champions Germany.

Neuer produced a wonder save from Theo Walcott in Tuesday's Champions League defeat to Arsenal before being culpable for Olivier Giroud's opener at the Emirates Stadium.

But Neuer says he refuses to play with fear, citing former Manchester United and Ajax goalkeeper Van der Sar as a huge role model for a braver style of play.

"I do not think I was the main protagonist. One of the very first to have brought a new perspective was Edwin Van der Sar, who played a lot with his feet and allowed the position to enter a new phase," he told France Football.

"I was inspired by his style of play. I enjoyed the philosophy of Ajax – either watching videos or following their matches."

Neuer was nominated for the Ballon d'Or last year and has become one of the world's premier goalkeepers – winning three Bundesliga titles, two DFB-Pokals and the Champions League.

"We must be aware of the risks taken and the dangers that can happen if my distribution is hazardous," he added.

"But fear is the last feeling I experience, you just have to have confidence in your qualities. I have gained a lot of experience and have developed a kind of instinct that allows me to decide whether I go or not.

"I am convinced by my style of play, so I take risks without much hesitation. I love to tackle, especially when the grass is wet, but my main aim is to be a complete goalkeeper who can do everything."