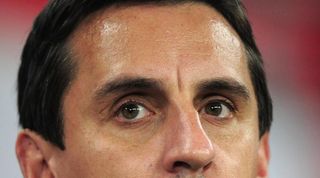 Reports surfaced throughout the British media on Monday claiming Moyes was set to be sacked as a result of his dismal first season at Old Trafford.

Neville, who spent his entire playing career at United, questioned the lack of an official comment from the club in response.

"I think the whole situation at the club right now is repulsive," said the ex-England defender on Sky Sports.

"The club really need to make a statement.

"It's been a world of madness where the average manager gets sacked every 12 months and I've always felt Manchester United should be different and hold itself up as club that stands against what is happening in the game.

"We used to laugh at what happened in Italy 20 years ago and say it is ridiculous but now we've almost become accustomed to it.

"I think fans are well within their rights (to call for Moyes to go), but I don't like it when professional people from inside the game come out and suggest the manager should be sacked.

"It isn't something you'll hear from me. I've never done the job. I do fear for David Moyes because of the explosion that has happened today, but I'm hoping the club will come out and clarify it and it won't be true."

Moyes was announced as Alex Ferguson's successor last May, but has endured a torrid time of things.

United sit seventh in the Premier League, 23 points adrift of leaders Liverpool, and were roundly criticised for their performance in a 2-0 defeat at Everton, Moyes' former club, on Sunday.