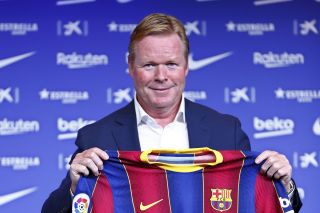 New boss Ronald Koeman will hold talks with Barcelona skipper Lionel Messi to thrash out his future and insisted he wants the striker to stay.

The 57-year-old Dutchman was named as Quique Setien’s replacement on a two-year deal on Wednesday.

He has left his role as Holland boss and was unveiled at a press conference at the Nou Camp.

👏 @RonaldKoeman takes his first steps onto the pitch at Camp Nou as the head coach of Barça 💙❤️ pic.twitter.com/FfzCZSqzV0— FC Barcelona (@FCBarcelona) August 19, 2020

Messi, who has scored 634 goals for Barca, has seen his future called into question amid the ongoing crisis at the club and Koeman will schedule talks with the Argentina star.

He told a press conference: “He’s still got a contract and is still a Barcelona player. At this point I need to speak to him because he is the captain.

“We need to work with him and speak with various players. We need to make some decisions but in Messi’s case I hope he stays with us.

“As a coach I would love to work with Messi because he wins matches. If he’s at the ability and level he has always shown I’d be more than happy for him to stay.”

The Dutchman has been drafted in following Setien’s swift exit in the wake of last Friday night’s humiliating 8-2 Champions League drubbing by Bayern Munich.

He is the third man to take charge this calendar year, with Setien having only succeeded Ernesto Valverde in January.

Along with Koeman, Barcelona have named Ramon Planes as their new technical director following the dismissal of Eric Abidal. Planes had been working under Abidal as his assistant.

Former Southampton and Everton boss Koeman will inherit a side which finished five points behind LaLiga champions Real Madrid and failed to win a major trophy this season for the first time since 2013-14.

Barca last tasted glory in the Champions League in 2015 under Luis Enrique.

Koeman returns having spent six years as a player with the Catalan giants.

🔊 @RonaldKoeman: "Today is a day to be very happy and proud. Everyone knows what Barça means to me. This is my home"— FC Barcelona (@FCBarcelona) August 19, 2020

He is perhaps most fondly remembered for his winning goal in the 1992 European Cup final against Sampdoria at Wembley.

Koeman began his playing career in Holland with FC Groningen, Ajax and PSV Eindhoven and returned after his time in Barcelona to join Feyenoord, where he has also worked as a coach.

He has managed previously in Spain during a short spell with Valencia.

Koeman added: “Today is a day to be very happy and proud. Everyone knows what Barca means to me. This is my home.

“I have been a coach for many years now and I have learned from great coaches as a player, I have experience and I think I’ve got the ability to bring Barcelona to this top level.

“The Dutch like to be at Barcelona. Why? Because we like to work and play football how it should be played. It’s a complicated moment because of Covid but football is something which should be enjoyed.

“Without enjoying it you are not going to do as well as you can do.”