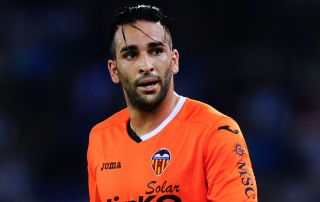 Rami, 27, is poised to join the Serie A outfit in January on loan until the end of the season, with a view to a permanent deal, after he was left out in the cold at Valencia following his criticism of manager Miroslav Djukic.

Milan are down in 12th in the league having won just two of their first seven games.

But France centre-back Rami, who has been training with the Italian giants this week, is confident he can help turn their fortunes around.

"I am a winner with a strong character. I can help the team physically and contribute in all senses," he told the club's official website.

"It is a great club with character. We are in a similar position to last year, but we are big family and we will come back. I only want to help the team and give my best as soon as possible."

With the transfer window closed, Rami will not be eligible to play until the new year but by training with Massimiliano Allegri's squad in the meantime, he believes he will be ready to hit the ground running in January.

And the former Lille man feels the presence of compatriot Philippe Mexes and French-born Guinea midfielder Kevin Constant will help him to settle in at San Siro.

"I have a great desire to work as much as possible and to get this experience started," he added.

"Knowing other players definitely helps. Mexes and Constant are really kind. I am trying to make friends and speak with everybody like Robinho, Kaka, (Nigel) De Jong. It feels like a family."