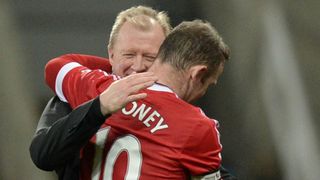 Louis van Gaal's men have been branded negative and dull by a number of observers, while McClaren has seen his team's mental strength questioned at various points this season as they battle against relegation.

But after a controversial and entertaining encounter which ended level after Paul Dummet's last-minute equaliser on Tuesday, the former England boss feels both sides provided strong responses.

McClaren told BT Sport: "Fantastic - what a reaction from them! They never gave up even at 2-0 and the [Georginio Wijnaldum] goal was vital.

"Second half we came out, created chances, equalised. We were devastated by the 3-2 and I think we deserved to get the point at the end.

"It was end to end. Boring United? They were not boring.

"Questionable attitude and character from our players? None of that, they have been fantastic. The building and growing, fighting for 95 minutes and we got the rewards.

"People early season were questioning that and the players have just come through that showing fantastic character, epitomised by certain individuals and especially [captain Fabricio] Coloccini.

"The team could have gone down after the penalty decision and at 2-0, but credit to them – they kept fighting.

"It must have been a great spectacle to watch as a neutral but as a coach it is a big of a nightmare."