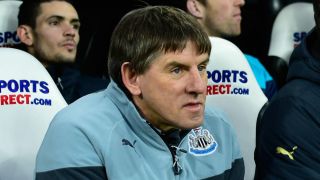 Newcastle United have confirmed Under-23s coach Peter Beardsley will take a period of leave while an investigation into his behaviour is carried out.

The Premier League club released a statement on Tuesday to confirm the news, but said no further comment would be made until their investigation is completed.

"After discussions with Peter Beardsley this morning it has been agreed that he will take a period of leave, to commence immediately, whilst the club conducts its investigation into allegations made against him," Newcastle's statement read.

"It would be inappropriate for the club to comment further until the conclusion of this investigation."

"Peter Beardsley is aware of inaccurate media reports which result from unauthorised leaks," the statement said.

"Allegations of unfair treatment have been made, which are currently being investigated. Peter Beardsley categorically denies the allegations. It is hoped the investigation will conclude quickly.

"Peter Beardsley will not be making any further comment at the present time and until investigations conclude. Peter respectfully request that his privacy and that of his family is respected."

The 56-year-old, who enjoyed two spells with the Magpies as a player, saw a Premier League inquiry over allegations of bullying during a previous period of employment with the club dismissed in 2003.