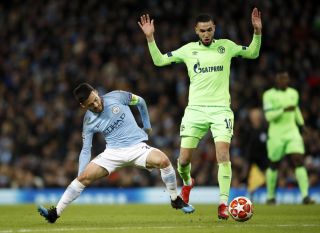 Newcastle have handed Nabil Bentaleb the chance to prove himself in the Premier League all over again after signing him on loan from Schalke.

The 25-year-old Algeria international will spend the rest of the season with the Magpies, who have negotiated an option to make the move permanent in the summer for a fee understood to be in the region of £8.5million.

Bentaleb has not played for the Bundesliga club since April last year after being sent to train with the club’s second string because of disciplinary issues with a knee injury not helping his cause, but head coach Steve Bruce is hoping a man who launched his career at Tottenham will slip seamlessly back into English football.

Happy to join the @nufc family very excited to be wearing the colours of such a historic club , and wish all the best to @s04 for the rest of the season! pic.twitter.com/p6bLRS5NWu— Nabil Bentaleb (@nabilbentaleb42) January 21, 2020

Bruce said: “He’s somebody who I paid particular attention to when he was at Spurs, when he broke through and got a big-money move to Germany.

“He’s played at the highest level now for the last four or five years, but he will come in hungry and feeling he has something to prove and will give us the competition we obviously need.

“With the numbers that we’ve got at the minute, he’s got a bit of experience and I think people will enjoy watching him play. He’ll come into the squad and I’m sure he’ll be a good acquisition for us.

“He’s gone from the Premier League to Schalke and played in the Champions League as well, so we’re delighted to get him. It’s a great signing.”

Bentaleb, who tweeted to say he was “very excited to be wearing the colours of such a historic club”, played 66 times for Spurs before heading for Germany, initially on loan, during the summer of 2016.

The midfielder completed a permanent move a year later and his 97 appearances for the club – he also scored 19 goals – include a series of Champions League matches.

He is delighted to have the opportunity to return to the Premier League as Newcastle attempt to cement their place in the top flight.

Bentaleb said: “I’m very happy to come back to the Premier League, especially with a club such as Newcastle.

“The project really interested me. I wanted absolutely to come back to the Premier League. The coach had some trust in me and the club also – I saw that straight away – and I think it’s the perfect move for me.”

Bruce will hope Bentaleb is not his only January acquisition with the club also in talks with Inter Milan over a loan deal for winger Valentino Lazaro, although they are in competition with Red Bull Leipzig in their pursuit.