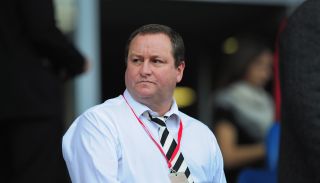 A demonstration saw several hundred supporters gather to voice their displeasure at Ashley's reign prior to the 2-2 draw at St James' Park on Saturday.

Many Newcastle fans have criticised the controversial businessman for a perceived lack of ambition, with the club signing only one senior player in the transfer window - Loic Remy on loan from Queens Park Rangers.

The sponsorship agreement with payday loan company Wonga, as well as the appointment of Joe Kinnear as the club's director of football, have also drawn the ire of sections of the Newcastle fanbase, although the club have defended both decisions publicly on a number of occasions.

In fact, Kinnear used his programme notes ahead of Saturday's clash to once again outline the club's stance over the Wonga deal.

He wrote: "The chasm that exists between the league's six most commercially powerful clubs and the rest is significant and growing ever wider.

"We cannot, at this time, compete commercially with the very biggest global brands in football because the hugely lucrative (sponsorship) deals will go their way.

"But what remains of the marketplace for the rest of us, we must and will fight for our share, and more.

"Through astute financial management and by maximising every commercial opportunity available to us, we will give ourselves the best possible chance of competing on the field with those whose strength off it makes them - on paper at least - untouchable."