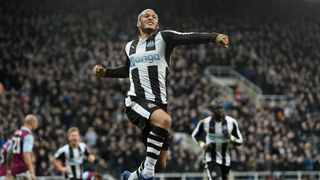 Newcastle United regained top spot in the Championship with a 2-0 victory that heaped misery on struggling Aston Villa.

In a battle between two clubs relegated from the Premier League last season, Yoan Gouffran's first-half opener and a Henri Lansbury own goal settled matters at St James' Park.

Rafael Benitez's side move back above Brighton and Hove Albion by one point, while Villa will be looking nervously over their shoulders after a ninth league game without a win.

The visitors had acquitted themselves well, but undid their hard work with some poor defending from a set-piece, allowing Gouffran to prod home three minutes before the break.

Hopes of a Villa revival were scuppered when Lansbury put through his own net just before the hour mark, the midfielder failing to clear Jamaal Lascelles' effort.

Steve Bruce's side – who suffered a further blow when Scott Hogan was taken off injured – have not won in the league since Boxing Day, leaving them dwelling in 16th, six points clear of the relegation zone.