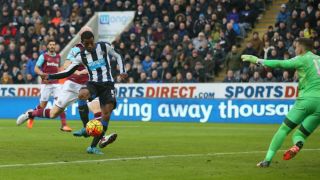 Newcastle United climbed out of the Premier League relegation zone with a vital 2-1 victory over in-form West Ham at St James' Park.

Ayoze Perez gave Newcastle the lead after just six minutes, bending a brilliant first-time shot into Adrian's bottom corner from the edge of the penalty area.

Newcastle's fine start continued when Georginio Wijnaldum converted Daryl Janmaat's cross from close range with a quarter of an hour gone, with Jonjo Shelvey involved in both goals on his debut for the club.

But Steve McClaren's side held on for a first Premier League win in six attempts to move them into 17th place, above Swansea City, who play Watford on Monday.

Newcastle were on the front foot from the opening whistle and Perez should have beaten Adrian from close range in the fifth minute, but the striker made amends by scoring soon after.

Shelvey dissected the West Ham midfield with an incisive pass and Wijnaldum's lay-off was perfect for Perez to curl a superb strike into the bottom corner from 20 yards.

The hosts were rampant and doubled their lead on 14 minutes. Shelvey picked out Daryl Janmaat with a brilliant 60-yard pass and Wijnaldum was on hand to turn in the cross for his ninth goal of the season, all of which have been scored at St James' Park.

Aleksandar Mitrovic went close to a third soon after but was denied by Adrian, before Paul Dummett's goalbound effort was blocked by James Collins.

Shelvey was running the game for Newcastle but the debutant was arguably fortunate to escape a card on 39 minutes when he appeared to catch Enner Valencia in the face with a stray arm.

Slaven Bilic's men were handed a way back into the match shortly after the break. Mbemba intercepted Aaron Cresswell's through-ball but gave the ball straight to half-time substitute Jelavic, who squeezed in for his first Premier League goal of the season.

Newcastle almost extended their lead on 64 minutes when Shelvey, urged to shoot by Newcastle fans, let fly from distance and the ricocheted deflection landed for Mitrovic to hit a thumping drive, which Adrian tipped over the crossbar.

Mitrovic should have made the points safe on 74 minutes after being freed by Shelvey but his shot was too close to Adrian, with the West Ham goalkeeper also blocking another vicious Shelvey 30-yard effort.

Despite West Ham pressure - including a great late chance for Kouyate - Newcastle held firm to claim a vital three points in their fight against relegation.