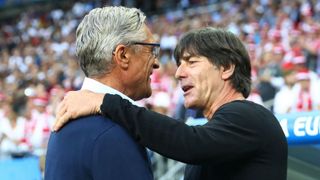 Newcomers are playing "the tournament of their lives" and making it difficult for the established powers at Euro 2016 according to Germany boss Joachim Low.

The world champions were held to a drab goalless draw by Poland at the Stade de France on Thursday, unable to build fully on their opening 2-0 win over Ukraine - now eliminated from the competition following a shock 2-0 loss to Northern Ireland.

Slovakia, Hungary and Iceland have also pulled off impressive results against the odds and Low believes a succession of closely contested games to date are down to the confident counter-attacking approaches being undertaken by the lesser lights.

Poland would not fall easily into that category but their coach Adam Nawalka tellingly admitted to happily allowing Germany possession in Saint-Denis, while feeling his team were under little pressure.

Low senses a changed landscape and cited England's stoppage-time comeback win over Wales as further evidence of the battles his team might face if they are to add the European title to World Cup glory.

"I don't know it that's a result of 24 teams entering but we see that the results are quite close," he said. "Many goals have been scored at the end of the game. France, Northern Ireland as well.

"The results are very close because the teams who participate for the first time - it's obvious; it's the tournament of their lives.

"They invest everything they have and do what they are good at. They defend and wait for their chance and counter-attacks.

"That's what you expected, that the teams would fight and invest everything

"England have won in the end today and that's what I expect to see, fights like that and sides who defend with 10 players."

Given the unpredictable nature of the tournament so far, Low was hesitant over branding any one side as favourites, although he does feel his own are among the frontrunners despite a shot-shy outing in the French capital.

"I think always in the group stage it is very difficult to predict who is the great favourite," he added.

"We've seen that in the last tournament that sides who were not so strong in the group stage improved later on.

"France are a favourite, they have a great side, the Italians had a great opening game. Then there's us and Spain are always another side [in contention] to win a tournament. Then there might be one or two other sides.

"From the knockout stage onwards, you cannot afford a bad day and then you need luck to advance. It is too early to predict who will get to the final."