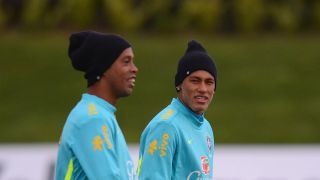 Neymar says Ronaldinho's artistic style may never be matched after the Barcelona and Brazil icon's retirement from football was confirmed.

Ronaldinho was a member of Brazil's World Cup-winning squad in 2002, and won the Champions League and two LaLiga medals with Barcelona before helping AC Milan to a Serie A triumph in 2010-11.

But the attacker's vibrant style of play and flair for the game made him football's brightest star in the early 2000s - preceding an era of dominance by his Camp Nou successor Lionel Messi and Cristiano Ronaldo.

"What an honour to be part of your history," Neymar wrote on Instagram. "I'll always remember your joy on the field. You've left a legacy that will hardly be beaten in the art of football. Thank you for everything that you did for football lovers."

Ronaldinho's retirement also drew warm memories and tributes from across the football world, including one of his great Brazilian predecessors Pele, who posted: "I hope you glide through life like you glided through tackles."