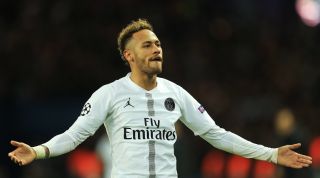 PSG forward Neymar could be available for £145m in summer 2020, according to El Mundo Deportivo.

The Spanish publication report that a clause in the Brazilian's contract will allow him to depart the Parc des Princes for a cut-price fee at the end of his third season at the club.

The Ligue 1 champions paid a world-record £198m for the former Barcelona man in 2017, but Neymar has yet to inspire PSG to European glory.

The 27-year-old, who was heavily linked with a move to Real Madrid last summer, has reportedly grown disillusioned with life in the French capital.

Neymar has scored 49 goals in 56 appearances for PSG, but defeat by Manchester United in the last 16 of the Champions League - a tie the Brazilian missed through injury - was a major disappointment.

Thomas Tuchel's side were also beaten by Rennes in the French Cup final last weekend, after which Neymar was seen striking a fan in the stands.

Madrid and other major European clubs will be monitoring the situation closely ahead of a potential bidding war next summer.