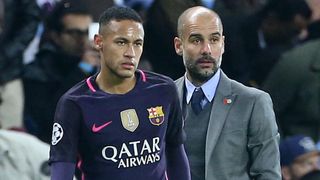 Neymar has reiterated his desire to one day play under Manchester City boss Pep Guardiola.

Paris Saint-Germain superstar Neymar missed the chance to feature under Guardiola at Barcelona, joining the club a year after the Catalan had left his role as head coach.

Brazil forward Neymar spoke in January 2016 of his admiration for Guardiola, who enjoyed a spell at Bayern Munich between his jobs at Barca and City.

And working with Guardiola is an ambition that Neymar still holds.

Speaking to ESPN's Brazilian edition, Neymar said: "I have always wanted to work with Guardiola.

"It's different, I arrived [at Barca] after he left. I really want to work with him."

Neymar joined PSG from Barca last August in a world-record €222million move, but has already been strongly linked with a return to LaLiga and his former club's great rivals, Real Madrid.