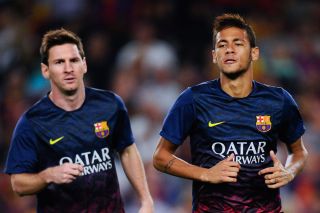 The 21-year-old Brazilian joined the Spanish champions in a reported €57 million deal from Santos in May, and has already become an integral part of Gerardo Martino's first-team plans.

Neymar - who is currently on international duty - said he has been welcomed by everyone at Camp Nou.

And he is particularly enjoying playing alongside four-time world player of the year Messi, with the duo contributing 10 goals between them in La Liga this season.

"Everyone at the club, my team-mates, coaches, employees and fans are treating me very well," he told Chinese magazine Titan Sport.

"It's an honour for me to play alongside him (Messi). He's a genius.

"It's fantastic to be able to work with Tata (Martino) and I hope this season will be wonderful for everyone."