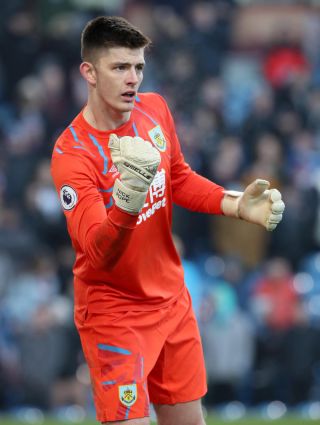 Chris Wood got Burnley level early in the second half, but they needed Pope to save Vardy’s 68th-minute penalty before Westwood hammered home the winner 11 minutes from time.

Few would have predicted the late heroics from Burnley during a first half in which they looked second best in virtually every department.

The visitors, stung by last week’s home defeat to Southampton, looked sharper and faster, always threatening to get in behind Burnley’s defence with the running of Barnes and Vardy.

Vardy rounded Pope in the 13th minute but with the angle against him pulled the ball back for James Maddison, who could not control it.

In contrast, Burnley were full of commitment but looked desperately short of ideas going forward.

There were grumbles from the home stands when Jeff Hendrick impressively beat Christian Fuchs to create space, only to dawdle on the ball until Leicester’s defenders recovered their ground.

Countless balls were pumped into Wood and Jay Rodriguez – the latter restored to the line-up after illness – but Jonny Evans and Caglar Soyuncu marshalled the front pair well, while Dwight McNeil shuffled from one wing to the other but struggled to get on the ball.

On the half-hour mark, Rodriguez strode forward but did not like the look of options to his left and right and instead shot tamely at Kasper Schmeichel to the sound of more groans from the stands.

Moments later, Leicester led. Burnley were appealing for a foul when Dennis Praet slid in on Jack Cork but Barnes did not hesitate as he scooped up the ball and skipped forward before firing past Pope.

Having seen Ayoze Perez head just over in first-half stoppage time, the visitors began the second half with their best move of the game as Maddison and Barnes combined to play in Praet, who saw his sweeping shot well saved by a diving Pope.

But Burnley quickly responded with their best chance as Charlie Taylor sent in a deep cross from the left and Wood got above Fuchs but headed over.

It was a rare chance from open play and it was no surprise that when Burnley did level in the 56th minute, it was from a set-piece.

Ben Mee rose highest to meet a corner at the far post and though Schmeichel blocked his effort, it fell for Wood to poke home from point-blank range.

Barnes and Maddison both shot straight at Pope for Leicester as the Foxes pushed forward, and Brendan Rodgers’ side had the perfect chance to go back in front when Mee fouled Maddison in the area, only to see Pope save Vardy’s penalty.

Pope denied Vardy again in the 78th minute after he ran onto a neat pass from substitute Kelechi Iheanacho, and Burnley completed the turnaround moments later.

Neat play created space for Taylor on the left, and though his cross was blocked, the ball fell for Westwood who drilled the ball beyond Schmeichel.