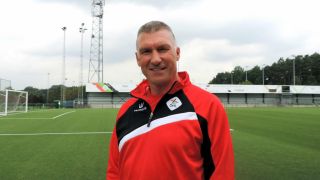 The move reunites Pearson with the Srivaddhanaprabha family, whose King Power International company owns Leuven and the Foxes.

Pearson was sacked by Leicester in June 2015 despite steering them to Premier League safety, going on to have a brief period in charge of Derby County between May and October of the following year.

OHL are fourth in the eight-team Belgian First Division B, with Pearson replacing Dennis van Wijk, who had been in charge since January.

"I know how to develop the club and I'm looking forward to contributing to it," Pearson said.

"The club has many good players and a good staff that guides them. I cannot wait to work with them and achieve our goals."

Aiyawatt Srivaddhanaprabha, chief executive of King Power International, added: "Nigel is an incredibly good manager with a wealth of knowledge, good people skills and a strong winner's mentality. He will put OHL on track for the next few years."