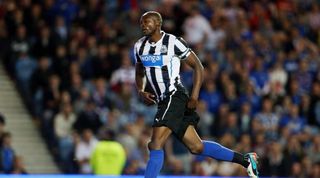 The 32-year-old forward has recently returned to Newcastle's starting line-up and netted in Saturday's 2-1 home defeat to Swansea City.

The goal – Ameobi's first in the Premier League since December 2012 – has re-ignited his World Cup bid.

And the forward, who represented England at Under-21 level before switching allegiance to Nigeria in 2009, wants to play all of Newcastle's remaining games in his efforts to reach Brazil.

Ameobi told TheNorthern Echo: "I just want to do everything I can for Newcastle, but from a World Cup point of view, then obviously the more I play, the better chance I have going.

"My focus is on playing for Newcastle because if I do that, then hopefully everything else will take care of itself.

"Make no mistake, I want to play games for this football club and help us do well. That is my priority.

"The World Cup is the World Cup and any player worth his salt would want to be there. But if I'm not playing for Newcastle then there's a very good chance that I won't be in the Nigeria squad either."

Ameobi's current deal expires in June and manager Alan Pardew is sure to chase forwards in the transfer window to bolster his squad.

On the subject of a new deal, Ameobi said talks have been delayed until the season's end.

"We'll discuss everything about my future at the end of the season," he added.

"I haven't really thought about what might or might not happen at all yet because this isn't the right moment.

"There's a lot going on at the moment, and things are pretty tense. We have to make sure we don't let this season fizzle out, and then once it's finished, that'll be the time to get around a table and talk about the future."