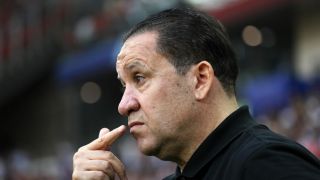 Tunisia coach Nabil Maaloul has dismissed rumours of unrest in his squad and is targeting the country's first World Cup win for 40 years against Panama on Thursday.

The North Africans cannot qualify for the next phase following defeats to England and Belgium in a tough Group G, but Maaloul is hoping to end on a high, despite admitting the players' morale is low.

"The players feel down. I felt a slight improvement in the last 48 hours and God willing, we will be able to overcome our last defeat.

"I am co-operating with the president of the Tunisian FA and we are talking with the players to boost their morale. We want to introduce new players, those that haven't played in the first two games, they were very demanding and those who played them are quite tired."

Tunisia's morale may be low, but Maaloul had no time for questions relating to disharmony in the group.

"I don't want to respond to rumours, it's a waste of time," he added.

"You know very well what's going on inside the squad, I don't care about rumours, I care about facts.

"Those who are with us in our base camp can testify to the team spirit in the squad."

Maaloul is one of a select group of coaches in Russia in charge of their own country and, although he wouldn't confirm if he is staying in the role beyond this week, he admits it has been a huge honour.

He said: "It has been a unique experience. I feel proud and honoured to be the coach of my national team, and we were able to qualify for the World Cup and the African Cup of Nations, these are exceptional achievements.

"There is a new style of play and I have to thank the head of the Tunisian FA who has supported me and supported my decision to rely on new players who will be stalwarts in the squad for the next 10 years.

"We also have veterans who are giving their best so it has been a positive experience for me. As for the future, I will answer this after Thursday's game."

Tunisia are hoping they will get special dispensation from FIFA to call up another goalkeeper. Mouez Hassen was injured against England while Farouk Ben Mustapha is doubtful after sustaining an injury in training on Tuesday, leaving them with just Aymen Mathlouthi between the sticks.